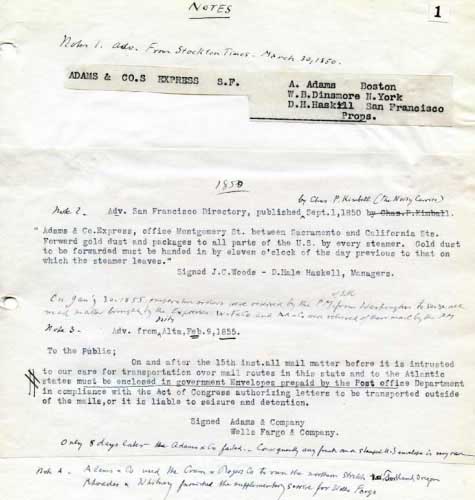 by Chas.P.Kimball (The Noisy Carrier)

“Adams & Co.Express, office Montgomery St. between Sacramento and California Sts. Forward gold dust and packages to all parts of the U.S. by every steamer. Gold dust to be forwarded must be handed in by eleven o’clock of the day previous to that on which the steamer leaves.”

On Jan’y 30, 1855 imperative orders were received by the PM of S. Fr from Washington to (???) all mail matter brought by the Expresses: W. F & Co and Ad & Co were relieved of their mail by the PM
Note 3 – Adv. from Daily Alta,Feb.9,1855.
To the Public;
On and after the 15th inst.all mail matter before it is intrusted to our care for transprotation over mail routes in this state and to the Atlantic states must be enclosed in Goverment Envelops prepaid by the Post Office Department in compliance with the Act of Congress authorizing letters to be transported outside of the mails,or it is liable to seizure and detention.
Signed Adams & Company
Wells Fargo & Company.
Only 8 days later the Adams & Co failed. – Consequently any frank on a stamped U.S. envelope is very rare